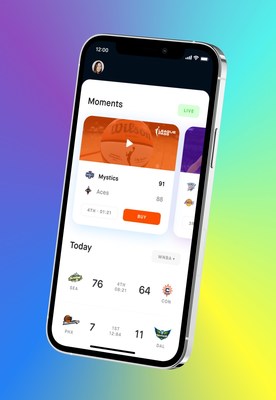 «With Buzzer, fans will have the opportunity to watch all the amazing moments in real time night after night in the W: incredible athletes, epic plays, history-making moments, and the thrill of close games or buzzer beaters,» says Sabrina Ionescu, New York Liberty guard and Buzzer investor. «As someone that spends so much time on my phone, Buzzer is a product that caters to how I, and many other Gen Z fans, consume sports. Buzzer recognizes the importance of amplifying women’s sports and reaching younger generations of sports fans, and this partnership with the WNBA is just the first step in realizing our mission to advance visibility of women’s sports.»

«Every market signal indicates that there’s an incredible appetite for women’s sports, yet there are still massive barriers to entry for fans to discover and watch,» says Bo Han, Buzzer’s founder and CEO. «Buzzer serves as a bridge to bring the magic of live sports to more fans. Through this partnership, we hope to help convert the incredible awareness and cultural currency the WNBA is experiencing into actual tune-in, bringing an even larger live audience to the league and its players. A true sports community cannot exist without women’s sports represented, and we’re thrilled to welcome the WNBA onto the platform as we further our commitment to an even playing field with the democratization and elevation of women’s sports.»

«The WNBA is proud to become the first women’s professional league to join Buzzer’s expanding lineup of major professional sports to be offered on the platform,» says WNBA Commissioner Cathy Engelbert. «We are continually looking for innovative ways to engage and attract fans, and this partnership with Buzzer will provide greater exposure to our game and will showcase the elite play on the court by WNBA players.»

Founded by Bo Han in 2020, Buzzer simplifies the discovery and viewing experience of live sports on mobile in a short-form live format. Notable Buzzer investors include Ionescu, Renee Montgomery, Michael Jordan, Naomi Osaka, Patrick Mahomes, J. Cole, LaMelo Ball, Devin Booker, Taylor Rooks and Ros Gold-Onwude. The platform offers a seamless user and viewing experience by organizing live sports streaming rights into one cohesive and accessible mobile platform, and allowing its users to set up customized alerts based on their preferences. Other league partners currently include the NBA, PGA TOUR and the NHL with additional partnerships slated to be announced in the coming months as Buzzer continues to expand as a multi-sport, aggregated platform.

Buzzer is currently in Early Access and available for download on iOS in the App Store and Android in the Google Play Store. Users can download the app and build profiles by selecting preferences for their favorite players, teams and leagues. Users are then added to a waitlist, until they receive full access to the app at which point they can consume live content. The platform will officially launch later this year.

About Buzzer
Buzzer is a new, notification-driven mobile platform for short-form live sports personalized for fans. Bo Han founded Buzzer in 2020 after leading Live Sports Rights Acquisition at Twitter for over seven years. In 2021, Buzzer was recognized on Fast Company’s list of Most Innovative Companies, SportsPro’s list of Emerging Sports Tech Startups To Invest In Now, Will Reed’s list of Top 50 Seed-Stage Companies To Work For, InHerSight‘s list of The 20 Best Internet Companies to Work For. The platform will officially launch later this year.

Headquartered in New York, Buzzer believes in hiring the best talent and is committed to fairness and inclusion. Buzzer administers a mentorship program focused on cultivating a community of industry leaders across sport, technology, and media paired with mentees from Historically Black Colleges and Universities (HBCUs) as part of its broader Strive Initiative. To learn more, download Buzzer on iOS in the App Store and Android in the Google Play Store, visit www.buzzer.com, and follow @Buzzer on Twitter and Instagram.

About the WNBA
Currently in its 25th season in 2021, the WNBA is a bold, progressive basketball league that stands for the power of women.  Featuring 12 teams, the W is a unique sports property that combines competition and entertainment with a commitment to diversity, equity and inclusion and social responsibility. Through its world-class athletes, the in-game fan experience, TV and digital broadcasts, digital and social content and community outreach programs, the league celebrates and elevates the game of basketball and the culture around it.

In 2020, the WNBA and the Women’s National Basketball Players Association (WNBPA) signed a groundbreaking eight-year CBA that charts a new course for women’s basketball – and women’s sports overall – with a focus on increased player compensation, improvements to the player experience, expanded career development opportunities and resources specifically tailored to the female professional athlete.  Key elements of the agreement are supported through the league’s new platform, WNBA Changemakers, with AT&T, the WNBA’s Marquee Partner and inaugural Changemaker, as well as fellow inaugural Changemakers Deloitte and Nike, and the recent addition of Google. During the 2020 season, the WNBA and WNBPA launched the WNBA Justice Movement forming the Social Justice Council with the mission of being a driving force of necessary change and continuing conversations about race and voting rights, among other important societal issues.