PORTLAND, Ore., July 27, 2021 /PRNewswire/ — The forward-thinking and genre-crossing writings of acclaimed author Ursula K. Le Guin, whose novels and short stories increased appreciation of science fiction and fantasy, are being celebrated with a new Forever stamp — the 33rd in the Postal Service’s Literary Arts series. The stamp was unveiled in a ceremony today at the Portland Art Museum. 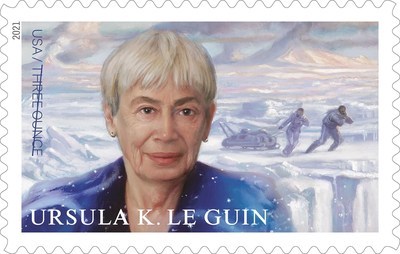 «Ursula once said she wanted to see science fiction step over the old walls of convention and hit right into the next wall — and start to break it down, too,» said Joseph Corbett, U.S. Postal Service chief financial officer and executive vice president, who served as the stamp ceremony’s dedicating official. «She felt the ideas represented in her fiction could help people become more aware of other ways to do things, other ways to be and to help people wake up.»

The stamp features a portrait of Le Guin based on a 2006 photograph with a background that references the wintry world and characters she created in «The Left Hand of Darkness.» Designed by Donato Gionacola, with Antonio Alcalá as art director, Le Guin’s name appears along the bottom of the stamp. The words «USA» and «THREE OUNCE» are printed vertically down the left side.

These Forever stamps will always be equal in value to the current First-Class Mail 3-ounce price. News of the Ursula K. Le Guin stamp is being shared with the hashtag #UrsulaKLeGuinStamp.

Born in Berkeley, CA, in 1929, Ursula Kroeber Le Guin was deeply interested in Native American cultures from a young age. It was a fascination that would inform her later work. After graduating from Radcliffe College in 1951 and earning a master’s degree from Columbia University in 1952, she began exploring the potential of science fiction and fantasy in the early 1960s, publishing her first novel, «Rocannon’s World,» in 1966. The novel intertwined elements of fantasy and science fiction — and inspired two sequels — while establishing a setting for many later novels and stories.

Le Guin’s writings were markedly ahead of the times. In 1969, she published «The Left Hand of Darkness,» a novel about an Earth diplomat named Genly Ai, who journeys to a wintry planet where two nations teeter on the brink of war — and where the inhabitants have no fixed gender most of the time. The book, which won the Hugo and Nebula awards in science fiction and fantasy, broke new ground and was often praised as the novel that permanently raised the literary expectations for science fiction.

In addition to the novels and fiction that won her dozens of literary awards and legions of avid readers, Le Guin also published volumes of poetry, wrote realistic stories about life in a small Oregon town and started a blog at the age of 81 that became the 2017 essay collection, «No Time to Spare: Thinking About What Matters.» She also published a translation of the classical Chinese philosophical and religious text, Tao Te Ching, the result of 40 years of Taoist reading and reflection.

Le Guin is credited with championing the literary and artistic value of science fiction and fantasy, as well as encouraging more women to write and read fiction in both genres. At the same time, she inspired many readers and writers of color by placing nonwhite characters at the center of her work and by tackling issues of racial injustice and colonialism in nuanced ways. Through lifelong interests in mythology, anthropology, feminism and Taoism, as well as through her wide-ranging translations, essays, poetry and nonfiction, Le Guin demonstrated that no writer needed to be limited by the boundaries of any genre.

Customers may purchase stamps and other philatelic products through the Postal Store at usps.com/shopstamps, by calling 844-737-7826, by mail through USA Philatelic, or at Post Office locations nationwide.

Information on ordering first-day-of-issue postmarks and covers is at usps.com/shop.

The Postal Service generally receives no tax dollars for operating expenses and relies on the sale of postage, products and services to fund its operations.