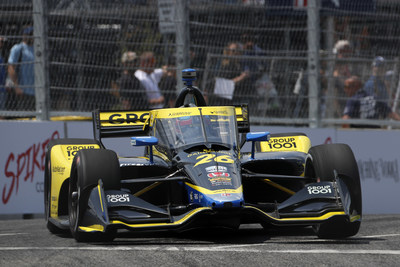 Herta’s qualifying edge of just over a half second in his Andretti Autosport Honda was huge by INDYCAR standards, and came after he also led the opening round for Firestone «knockout» qualifying.  Herta’s other pole this season came on the St. Petersburg, Florida, street circuit and his run today was the sixth pole of the season for a Honda driver.

Fellow Honda driver Scott Dixon will start on the outside of the front row, second, in his best qualifying effort since he qualified on the pole for the Indianapolis 500 in May, and is the third front-row start of the season for the six-time champion for Chip Ganassi Racing.

Dixon’s teammate, Alex Palou, qualified third fastest today. But the current championship points leader will start ninth after an issue in pre-race testing resulted in an «unapproved» engine change, resulting in a six-place grid penalty at the next event.

Alexander Rossi now will start third in his Andretti Autosport Honda; with fellow Honda drivers Romain Grosjean (Dale Coyne Racing with RWR) and Jack Harvey (Meyer Shank Racing) completing the top six on the grid.  The 27-car field for Sunday’s 80-lap race is the largest of the season outside of the Indianapolis 500.

Quotes
Colton Herta (Andretti Autosport Honda) Pole qualifier, his sixth career INDYCAR pole and second of 2021: «»I mean, it was a good lap but what we did in Q1 [the first qualifying round] really helped us there with being able to transfer [to Round 2, by only using the harder compound] ‘Black’ (primary) tires. «That was the biggest thing, is being fast on the blacks. It was really just made it a lot easier for the rest of the way. Great job by everybody; great job by the team. The car is fantastic. As you can see what we’re able to do on the black laps compared to everybody, we’re really in a league of our own. So, it felt amazing. A good car to take into the race tomorrow, too. Nice and stable. So, yeah, really excited [for the race tomorrow].»

Scott Dixon (Chip Ganassi Racing) Qualified Second: «I knew the PNC Bank #9 was super-fast; the Honda’s have been super-fast all weekend with drivability and just power, I think. That’s been a positive. The car was just really fast.  We knew Herta was going to be fast because he was the only guy with new [softer compound ‘Red’] tires, and he’s been quick all weekend. He definitely deserved [the pole], so kudos to that group. We’ll see how tomorrow plays out, but starting on the front is fantastic for us.» [How do you win on this track tomorrow?] «Go fast, take chances.»