LOS ANGELES, Aug. 3, 2021 /PRNewswire/ — Global esports organization and gaming collective Gen.G and McDonald’s have renewed their esports partnership which is aimed at engaging employees and gaming fans in select regions on the west and east coasts. On the heels of its first successful esports activation in Southern California, the program will now expand to select D.C., Maryland, Virginia and Eastern Shore areas. 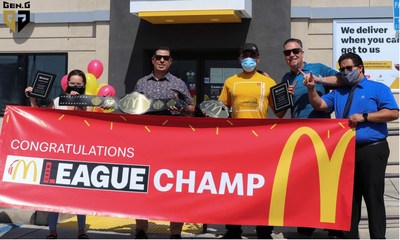 The McDonald’s Crew League program will return with more than 200 employees across 70 Southern California locations already signed up to compete in EA Sports™ FIFA 21 or Super Smash Bros Ultimate. The second season of the SoCal McDonald’s Crew League will kick off on August 24th with a 6-week play-in tournament. An employee from one of McDonald’s North Hollywood locations was crowned the Crew League inaugural season champion and won $1000, a championship belt and a plaque at their location.

The McDonald’s Crew League program in DC, Maryland, Virginia and Eastern Shores will launch on August 24th with a five-week play-in style tournament. Employees will vote on the game of their choice and compete to qualify for the live playoff broadcast on Twitch.tv. Prizes will be awarded to 2nd and 3rd place winners with a trophy going to the top player and the winning franchise location.

«More and more crew members are passionate about gaming and we want to provide an opportunity for them to showcase their talents in what they love doing,» said McDonald’s Owner and Operator Carlos Mateos Jr. «Being able to enhance the employee experience is something we take pride in and we love creating something meaningful for our employees.»

McDonald’s is also searching for the best young Super Smash Ultimate players in the area with its All-Star Tournament that kicks off on August 29 for residents in Washington D.C., Maryland, Virginia, or Eastern Shore regions and on September 5 for SoCal residents. Players will compete for bragging rights as well as such prizes as a custom All-Star Jersey, custom Switch carrying case, and McDonald’s gear.

«Our successful programming with McDonald’s really shows the excitement of and appetite for gaming seen among youth today. McDonald’s sees the value in building business via esports by cultivating consumer engagement and creating stronger employee connections,» said Arnold Hurr, COO at Gen.G.  «We are excited to expand to the east coast and continue working with McDonald’s as they are invaluable partners that innovate right alongside us. There is so much value in fostering dialogue around gaming and we are excited to be able to leverage gaming and esports to do just that.»