LAS VEGAS, Aug. 3, 2021 /PRNewswire/ — As an official logistics partner, Gebrüder Weiss supports the «Swissloop Tunneling» research team at the Swiss Federal Institute of Technology (ETH) in Zurich. The ETH team is involved in the further technical development of the Hyperloop high-speed transport system. With a sponsored land and sea transport from Dübendorf in Switzerland to Las Vegas, Gebrüder Weiss is ensuring that the research team can participate in September at Not-A-Boring Competition, «Can you beat the snail,» with its high-tech drilling robot. The Hyperloop competition will involve drilling a tunnel as quickly and accurately as possible. 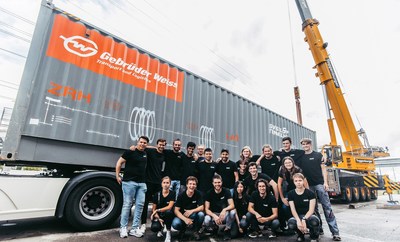 The idea behind the Hyperloop project, based on a concept developed by Elon Musk, is to transport people and goods over shorter distances through tunnels under or above the earth’s surface to their destination at high speed. To make tunneling financially viable, the drilling robots required must be as fast, compact, and automated as possible. The conditions set by Elon Musk for the high-tech scientific race in Las Vegas are challenging. As a reference, for drift velocity, he has specified the speed of a snail, which should be surpassed if possible.

«As a provider of future-oriented logistics solutions, we have to start thinking today about how we can ensure the freight mobility of tomorrow under economically feasible conditions. The Hyperloop project may still seem somewhat exotic to us today, but it promises feasible solutions for the mobility requirements of the future,» says Lothar Thoma, Managing Director Air & Sea at Gebrüder Weiss.

Stefan Kaspar, founder and co-president of Swissloop Tunneling, said, «Questioning existing transport systems for people and goods and looking for feasible alternatives – our vision is nothing less than to revolutionize tunneling and help a technology achieve its breakthrough. With the logistical support of Gebrüder Weiss, our vision is one step closer to becoming reality.»

About Gebrüder Weiss
Gebrüder Weiss, a global freight forwarder with a core business of overland transport, air, and sea freight and logistics, is the world’s oldest transport company with a history that dates back more than 500 years. The family-owned company employs more than 7,400 people worldwide and boasts 170 company-owned locations. The business has expanded its North American locations to include Atlanta, Boston, Chicago, Dallas, Los Angeles, New York, San Francisco, Montreal, Toronto and Vancouver. Developing and changing with its customers’ needs, Gebrüder Weiss is also a pioneer in sustainable business practices having implemented myriad ecological, economic, and social initiatives. The company’s voyage into North America, along with its continuous growth, illustrates the need for highly experienced providers of global solutions through an international network of supply chain experts. Customized solutions with a single point of contact provide customers with an exceptional service experience focused on reliable and economical solutions. Visit GW-World.com for more information.