CLEARWATER, Fla., Sept. 8, 2021 /PRNewswire/ — Clearwater Marine Aquarium is expanding their efforts in the fight to save manatees. On International Manatee Day they unveiled plans to transform the former Winter Zone into a habitat to rehabilitate manatees for release. Officials estimate it could cost nearly $10 million to renovate Winter the dolphin’s previous home into a site for manatee rehab and research. 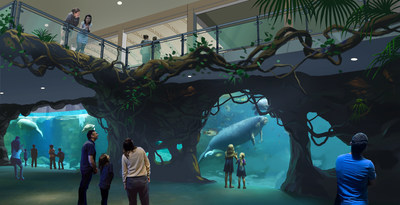 «I appreciate that CMA educates our citizens and our visitors on maintaining the quality of our marine life – it’s so critically important,» said Mayor Hibbard.

This reveal comes on the heels of an announcement CMA made in July to open a rehabilitation center at their Fred Howard Park location this winter. The location, originally built to rehab cetaceans, will be ready to accept the influx of manatees affected by the ongoing Unusual Mortality Event (UME) occurring on the east coast of Florida as well as those in need of care from boat strike wounds and cold stress syndrome. Collectively, CMA estimates they will be adding approximately 12 more «beds» for manatees in need.

«The addition of both sites to the Manatee Rescue and Rehabilitation Partnership capacity broadens our duty as devoted stewards to the species as well as to our colleagues,» said President and Executive Director of Clearwater Marine Aquarium Research Institute Dr. James «Buddy» Powell.

Clearwater Marine Aquarium presented a check to Andy Garrett with Florida Fish and Wildlife Conservation Commission, as a representative for the MRP, for ten thousand dollars, on top of the annual dues the organization already pays to fund the Partnership’s rescue and rehabilitation efforts.

«It takes all of us to protect and save our manatee population and we hope this small donation encourages others to donate as well,» said Powell.

For over a decade, Clearwater Marine Aquarium has assisted in rescuing, releasing, and tracking wild manatees around the world. Together with current rehabilitation techniques gained from the experience of its partners in the MRP and knowledge gained from post-release monitoring, CMA’s rehabilitation efforts will focus on behavioral and welfare components to further manatees’ adaptation to the wild post-release.

Clearwater Marine Aquarium has received $95,000 in federal funding to assist in the construction of the new manatee rehabilitation sites. It is seeking additional grants to help offset the costs. A fundraising campaign will also run through the duration of the construction. For more information or to donate, visit manateehelp.org.