ROME, July 27, 2021 /PRNewswire/ — AS Roma and Zytara Labs announced today that the companies have signed a €36M ($42M), three-year exclusive product partnership agreement, with support from the DigitalBits Foundation. This partnership further cements the Club’s commitment to technological advancement and will provide innovative and unique opportunities to AS Roma fans around the world. 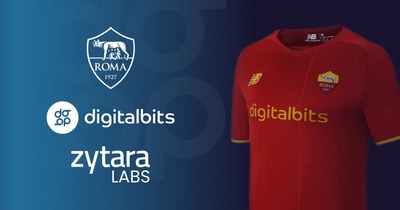 AS Roma and Zytara Labs will use the DigitalBits blockchain to:

AS Roma becomes the world’s first professional football organisation to broadly embrace blockchain technology to this degree. Going forward, the DigitalBits blockchain will be completely integrated with the club, providing a seamless, advanced experience for new users and fans alike.

To commemorate the launch of this partnership, AS Roma will be selling the first eleven jerseys of the 2021-22 season worn by the Giallorossi players during the friendly between Roma and Montecatini, a match that also marked the beginning of the José Mourinho era on the club’s bench.

All proceeds from these sales will be donated to Roma Cares, a public charity supporting local communities and aiming to foster social solidarity through a range of initiatives in the areas of sport, charity, social care, education, training, as well as the promotion of culture and art. For more information, please visit www.asroma.com/en/roma-cares

Guido Fienga, CEO of AS Roma, said: «We could not be more excited to have AS Roma officially join the DigitalBits ecosystem. DigitalBits is a blockchain known for its speed, efficiency, and sustainability: traits that mirror the values of our club and will allow us to deepen the engagement with our fans worldwide in numerous ways.»

As part of this three-year partnership, Zytara Labs becomes a main global partner of AS Roma and, as recently unveiled by New Balance and the club, the DigitalBits brand becomes the primary logo front and center on all jerseys (home, away, third and goalkeeper) for the AS Roma Men’s First Team, Women’s First Team, Primavera and Youth Teams during all league, European, cup and domestic and international friendly matches.

Al Burgio, Founder of Zytara and the DigitalBits blockchain, said: «This historic relationship with AS Roma, one of the most legendary football teams in the world, is transformative, not just for Zytara and DigitalBits, but for the blockchain industry as a whole. AS Roma will be expanding the collective imagination by demonstrating how blockchain technology can be leveraged to elevate the connection between sports teams and their community of fans and other supporters.»

AS Roma is one of the most renowned Italian football clubs in the world. Founded in 1927, the club carries the colours, symbol and name of the city it is based in. Throughout their history he Giallorossi (‘Yellow-Reds’) have won three Italian titles, nine Coppa Italia crowns, two Supercoppa Italia trophies and the Inter-Cities Fairs’ Cup.

The club plays its home matches at the world-famous Stadio Olimpico, site of the 1990 World Cup final and 1960 Olympic Games, and is famous for the world-class players it has brought through its youth system: iconic names like Francesco Totti, Daniele De Rossi, Agostino Di Bartolomei and Bruno Conti.

AS Roma is an attitude: a way of life powered by the love, passion and indisputable loyalty
of our fans. It is a symbol of the city, the red and yellow shirt its beating heart. The club lives and breathes its history, and lets innovation guide it to further an already rich legacy.

The club is owned by The Friedkin Group (TFG), who completed a takeover in August 2020. The men’s first team is managed by Jose Mourinho, one of the most successful and highly-regarded coaches in the history of the sport.

Founded in 2014 with the aim of promoting education and positive values in sport, Roma Cares is a public charity tied to AS Roma’s wider commitment to corporate social responsibility and the importance of respect. Roma Cares aims to foster social solidarity through action in the areas of sport, charity, social care, education, training, as well as the promotion of culture and art.  The foundation is engaged in activities to benefit local communities, such as projects and campaigns aimed primarily at supporting and aiding the development of children and young people in difficult situations.

Zytara Labs develops innovative products and platforms that leverage blockchain protocols, such as DigitalBits and Ethereum. The company is also a full-service production company and studio that supports professional athletes, musical artists, actors, gamers, sports teams and other brands with the creation, sales, and marketing of non-fungible tokens (NFTs). Zytara Labs is a wholly owned subsidiary of Zytara Inc., the fintech company building the digital financial institution of tomorrow.

The DigitalBits Foundation (formerly the XDB Foundation) is a non-profit organization focused on assisting DigitalBits and related technologies. The DigitalBits Foundation’s core objectives include: supporting the innovation and adoption of the DigitalBits blockchain and the use of cryptocurrency in enhancing the consumer experience and corporate social responsibility initiatives, shaping commercial standards and requests for technical expansion, growing the DigitalBits community through the inclusion of diverse regions; providing accountability and sustainability practices; and facilitating partnerships and ecosystem development.

DigitalBits  is a layer-one blockchain protocol that prioritizes security, speed, and cost-savings. Any asset can be tokenized on the DigitalBits blockchain, including branded stablecoins to incentivize consumer loyalty, fan engagement, social tokens, and NFTs created by artists, celebrities and sports organizations. By making micropayments efficient and cost-effective, DigitalBits provides the foundation for real-world mass adoption of blockchain technology and cryptocurrency.